In theory, zoning provides isolated spaces for irritating land uses like noisy factories, which would otherwise bother nearby people.

The problem is that the zones for irritating land uses have to border the other zones somewhere. A nuisance that is allowed in an industrial zone can bother people in a nearby residential zone. A small town with a few zones might use a river or lake as a barrier between districts, but in Ann Arbor today, land uses are not separate. Industrial zones touch residential zones all over the map. 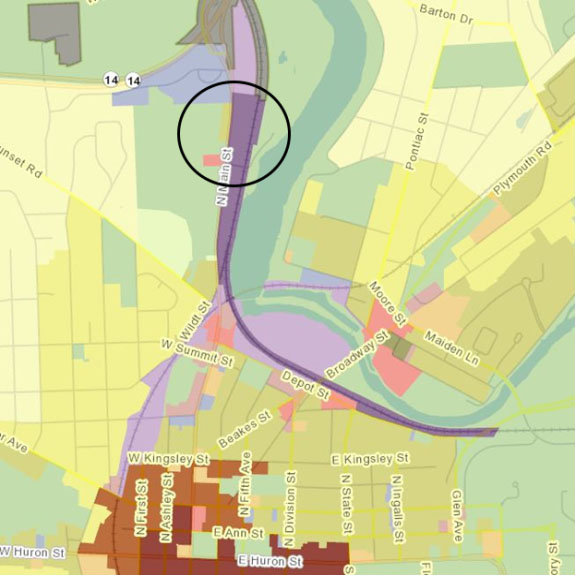 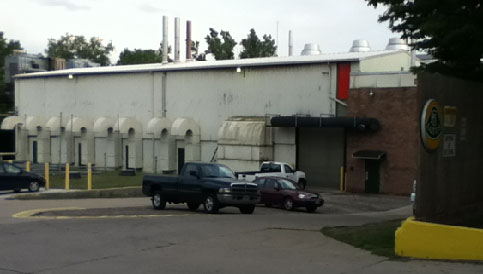 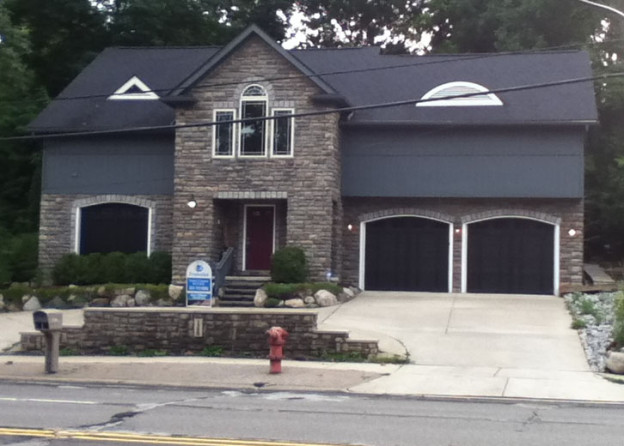 A house across the street in the R4A residential zone

So what is stopping industrial uses from sending dust and noise to nearby houses? City laws like the Noise Ordinance and Air Quality Control Ordinance. These performance standards forbid dangers and serious nuisances in all zones, but they do not solve the problem of how to isolate moderately disturbing land uses. Some people prefer areas that have strict rules for nuisances like noisy truck deliveries and loud businesses open late, but other people prefer areas with more lenient rules. Separating the areas is currently not possible, because people in the lenient zones can bother people in nearby restrictive zones. It is also not possible to ban moderate irritations from the whole city. It is illegal for cities in Michigan to completely exclude needed land uses, so necessary irritations must go somewhere.

Currently, residents can only avoid moderate nuisances if they push harms away from themselves. 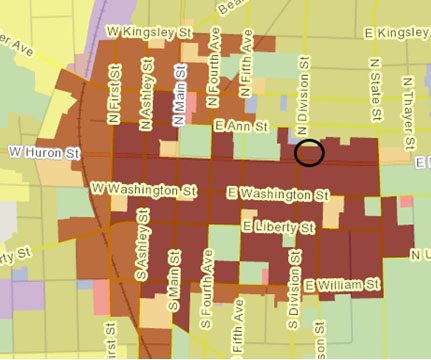 The red is D1 Downtown. The dark yellow is R4 Residential. The circle contains a planned 14 story building.

Many nearby residents are angry, and one of their complaints is that shade from tall buildings is a nuisance. However, tall buildings create space for people to live and work, so city council is not willing to ban all structures taller than 30 ft. The D2 district, which allows 60 ft. buildings, is supposed to solve this problem by providing a buffer between the D1 and other zones. However, the D2 district does not fully circle the D1, and even if it is expanded, there are people just outside the D2 who feel that a six story building is a nuisance. In 2010, neighbors successfully opposed The Moravian, a six story apartment built near the border of the D2. Wherever there is a line between two zones that allow different degrees of harm, people in the restrictive zone will have to live with the higher degree of harm. This buffering problem will reoccur as long as traditional zoning exists.

City council recognizes that each district’s zoning rules affect people in nearby zones, and they invite people to give their opinions on each zoning change. When people help make zoning rules for their neighbors, they sometimes act in their own self interest. Some residents would rather have fewer people and less traffic in their neighborhood, even if they know that people must live somewhere. Neighbors argue for density restrictions that make housing more expensive, and force people to live outside the city, often in subdivisions built over fields and forests. Traditional zoning creates new problems without protecting residents from nuisances.

The height limit for a building in an unrestricted zone depends on its distance from a restricted zone. For example, the rule could be:

“The maximum height of a structure is either 35 feet, or one half the distance between the structure and the nearest property in a restricted zone–whichever value is greater.”

This plan allows tall buildings in the center of downtown, but not the edges. No building casts a shadow on a restricted property until roughly one hour before sunset, when shadows are about twice as long as buildings. Residents are better protected, and there is more space for stores and apartments. Similar controls for noise and other irritations protect people in restricted zones from nuisances, regardless of nearby zoning changes.

The new zones are arranged to protect areas that the current zoning code intends to protect. The Restricted Mixed Use zone covers areas currently zoned residential. The Mixed Use Zone covers commercial and industrial areas.

The plan will better protect residents and create more space for dwellings and businesses. Housing and commercial space will be more affordable, fewer people will build over farms and fields, and land use changes will occur with fewer expensive and unpleasant disputes.

6 thoughts on “The current zoning code cannot protect people from harm. Our zoning plan can.”